An Island, Two Nations: The Impact of the Pandemic on Caribbean Women and Girls

Being a woman in a third world country represents a risk. Where poverty is feminized, the potential for the COVID 19 crisis to accentuate gender inequalities could be disastrous, and it is already happening. Women of all ages who were already exposed to high standards of violence, gender inequality and poverty now face the additional challenge of surviving a viral pandemic within the pandemic that is patriarchy.

On May 5th Jesula went to the Lilavois area 47, a community in western Haiti, to gather information for this blog about how the pandemic affects women and girl’s lives. At the same time, Esther went to Monseñor Nouel, in the north of the Dominican Republic to do the same.

Jesula spoke to young mothers working in the informal sector, who support their families by selling produce from street markets. They explained that their income has been severely impacted by the pandemic. Some days they sell nothing at all. Street food and bread vendors have lost customers because people are afraid of contracting the virus. Laundress women (a common occupation in Haiti) are also no longer receiving customers for the same reason. Without their regular income, these women and their children suffer. They say "We cannot stay at home, we have to go outside to find something to feed the little ones". Unsurprisingly, they are concerned about their children’s future, and are feeling great uncertainty about life after the pandemic. 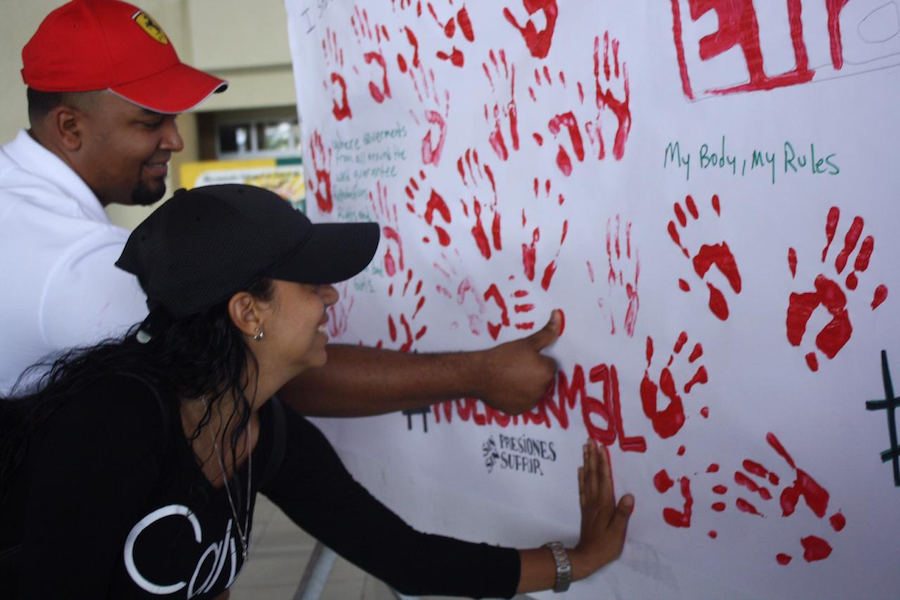 Women working in the formal sector have also been affected. Some have lost their jobs, including schoolteachers, who are not being paid because schools are closed. Coronavirus has caused great unrest in Haiti, but even before the pandemic the country had experienced three months of shutdown due to political problems. When activities were just resuming, Covid-19 entered the country. In the V Centenario neighborhood in the province of Monseñor Nouel, in the north of the Dominican Republic, Esther talked to Natalia, who has worked as a stylist for several years. She told us how her business has been particularly affected by the pandemic.  She explains “It has paralyzed me. It has affected me a lot, people are afraid. I used to have three to four clients every day, this week I have had none. I am a mother and father in my house''. She also points out that household chores have increased significantly, because family members spend more time indoors.

The percentage of labor informality in the Dominican Republic is 58.7%, according from the 2017 National Continuous Labor Force Survey (ENCFT). In Haiti, the informal market sector is the main distribution channel throughout the territory, more than half of the population is dedicated to buying and selling supplies. Informal and more precarious jobs, as well as domestic and care work, are carried out almost exclusively by women in both nations.

At Lilavois 47, Jesula was also able to interact with young schoolgirls and academics, who expressed concern about the missing school year and the ineffective action plan of the government health system against the virus. Haiti does not have good hospitals and there is no access to effective sexual and reproductive health information and services, these services are being delayed and neglected. Many young women are unemployed, and they wonder if their dreams will ever come true. After the devastation of the pandemic, will they be able to continue school? Schoolchildren are worried about their future, and universities are wondering how they will function. In a country where the state has historically failed to care for its youth, the answers are uncertain.

The experiences gathered in Lilavois 47 and Natalia's words show that the reduction in economic activity due to the pandemic particularly affects informal workers who have lost their livelihood almost immediately, without any support or possibility of an alternative general daily income. Women and girls in the Dominican Republic and Haiti are the population most affected by the COVID 19 health crisis. The saturation of health systems, the closure of schools, and the gendered division of labor makes care tasks fall mostly on women and girls. They are expected to care for sick relatives, the elderly and children. Many employed women face difficulties in making care tasks and telework compatible, or they have directly lost their jobs and income.

Female health workers, community volunteers and caregivers are being disproportionately affected by the crisis.  They form the front line of the response, and combined with the gender pay gap, these women assume greater physical, emotional and economic costs, as well as a higher risk of infection in the response to the pandemic across the whole island.

In the Caribbean, women will experience the greatest repercussions of the economic hardship generated by this health emergency. It is essential to attend to the immediate needs of women in the front line of the response and incorporate them into decision-making processes.The Dominican government reported that during the quarantine it received a total of 3,353 complaints of gender violence through the call line “VIDA” (life), in the first 46 days of the lockdown. Equivalent to an average of 72.89 complaints per day but these numbers are expected to increase, due to the uncertainty and pressure that the pandemic process could generate in the abusers in an already macho society that predominates in the Dominican Republic.

AQUELARRE RD, an organization Esther co-founded, alongside several feminist activists has started a social media campaign with the hashtags #Encuarentenaconmiagresor and #Queremosrespuestas. "We are demanding the State social commission of the high-level committee to manage COVID-19 include the competent women-lead institutions to the table, and create a crisis management and mitigation plan that includes timely attention to the increase of gender violence in the midst of confinement and access to sexual and reproductive health services  in Primary Care Units, including a wide range of contraceptive methods and emergency contraception."

Along with this, 81 feminist organizations committed to the human rights of women signed a document demanding that the Dominican Government guarantee equality standards and pay attention to the needs of women. The Vice President's office partially responded to the demands, allowing these organizations to register more than 2,400 women from the informal sector excluded from the covid-19 aid program "QUEDATEENCASA" (Stayathome).

Later this month, many enrolled domestic workers benefited from the first payment of $ 100 monthly government subsidy program. In the west side of the island Jesula has been providing literature for young mothers to help with mental health and wellbeing as activism during the lockdown.

Jesula explains that ''Young women and girls, at reproductive ages, need basic resources to support themselves, to guarantee them their most basic rights to sexual and reproductive health and a state program that can help them continue their studies in this COVID-19 period. It is important that governments of both our nations ensure access to sexual and reproductive health services and care. It is expected that the rate of unwanted pregnancies will increase, due to the diversion of resources from ordinary health services. This situation aggravates the lack of access to services, contraception and prenatal and postnatal health care."

Esther says “In times of crisis, the worst part is borne by women and girls, the social inequality, unequal power relations between women and men, systemic structural violence, inequality in the world of work and care tasks. This reaffirms that patriarchy is the most aggressive and disdainful pandemic that affects half of humanity since unmemorable centuries. Education in equality is the way, only together, we can create a world that is better, stronger and safer for all women and girls”.